Finance Minister launches DEA’s three short films on Externally Aided Projects, financial literacy and lines of credit to other countries by the Government 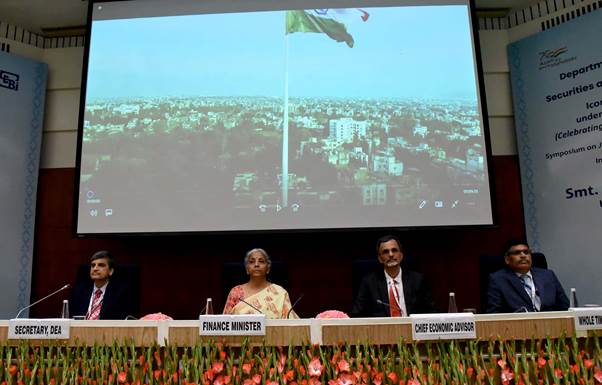 In her address, the Finance Minister said that India’s fundamentals are once again sound because of the many steps taken by the Government since 2014. Major steps taken by the Government, before the COVID-9 pandemic hit us, which include reducing the corporate tax, ensuring that the economy is greatly digitised, bringing in the GST and IBC – all of this heavylifting prepared us for the unprecedented situation of the Pandemic, she said.

Smt. Sitharaman emphasised that when Government looks at targeted approach of providing assistance and takes the input from the ground and does so quickly, in time and in an open fashion, the impact is for all to see. In this context she cited a study on Pradhan Mantri Garib Kalyan Yojana (PMGKY) which brought out that the probability of people cutting down consumption utilities has come down by 75% across the country. The study has also shown that the PMGKY reduced the probability of borrowing money by 67% of all respondents. 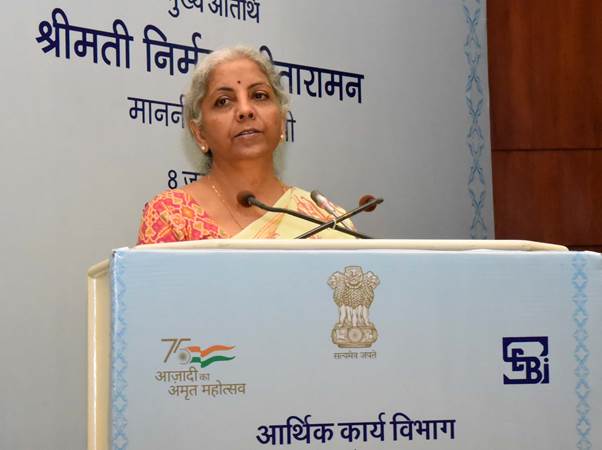 Citing another study on the Emergency Credit Liquidity Guarantee Scheme (ECLGS), the Finance Minister stated that as of March 2022 loans sanctioned under this scheme have crossed Rs 3.19 lakh crore and the scope of ECLGS has now been extended till 2023. The study says that this handholding has kept many people afloat during the Pandemic.

The third study highlighted by the Finance Minister was on the Ayushman Bharat scheme wherein the implementation of this scheme has been associated with a 21% decline in out of pocket health expenditure and 8% reduction in the tendency to borrow for emergency health purposes.

The Finance Minister underlined that the Department of Economic Affairs has channelised external aid towards every region of the country, with the support of multiple multilateral institutions. India very smartly raised funds and distributed them not only for infrastructure building but also for livelihood prospects in each region. Smt. Sitharaman also appreciated the DEA’s efforts through the IDEAS project that spans across so many countries and making a difference to livelihood environment, especially for most of Africa and also for the Island countries.

In his address during the AKAM celebrations, Chief Economic Advisor Dr Anantha V. Nageswaran said that the structural reforms of this Government, such as the Goods and Services Tax (GST) and the Insolvency & Bankruptcy Code (IBC) will manifest their advantages and potential in the coming decade, once the current clouds of global political developments and macro monetary policy challenges dissipate. The CEA underlined that for these reasons India is forecasted by the International Monetary Fund (IMF) to cross $5 trillion by 2026-27 and if GDP of the country doubles every 7 years, we will be $20 trillion GDP by 2040 with the per capita income close to $15,000.

Dr Nageswaran stated that India is better-positioned than many other countries in facing the current challenges. He indicated that we face challenges of managing a sustainably high growth rate, moderate inflation, keeping the fiscal under balance and also ensuring that the external value of the rupee remains stable. The CEA stated that the Government is prepared to meet the challenges of balancing these core important considerations.

NSDL’s outreach initiative ‘Market Ka Eklavya – Express’, a programme specially designed to introduce students to the basics of investing and financial markets was screened during the event.

‘Market Ka Eklavya – Express’ lays the foundation of the twin pillars of Financial Independence, namely, Financial Awareness and Financial Discipline in a simple language using relatable examples from everyday life to explain complex concepts. As a part of the AKAM celebrations, NSDL has recently launched the programme in 8 languages to reach 75 cities to commemorate 75 years of independence.

The Finance Minister also released a short film ‘Sahyog se Samriddhi’ on Externally Aided Projects during the Iconic Week celebrations of Azadi Ka Amrit Mahotsav. The film showcased the role of Externally Aided Projects in India’s development trajectory since 1947, with a special emphasis on India’s engagement with multilateral and bilateral agencies in last 8 years.

Smt. Sitharaman also inaugurated a film on the lines of credit called “IDEAS – India Partnering in Global Growth”. This film showcased India’s recognition as a trusted development partner for the developing economies. The Indian Development and Economic Assistance Scheme (IDEAS) has played a key role in the socio-economic development in the partner countries. The film features key marquee projects financed by Exim Bank of India under the GoI Lines of Credit  in Africa, Asia, Latin America, Oceania, and the CIS region.

During the morning session, engaging discussions on ‘Emergence of women investors in securities market’ and ‘Growth of Indian retail investors’ during the symposium on ‘Jaagruk Niveshak: Samridha Bharat ki Neev’ organised by SEBI in collaboration with Department of Economic Affairs took place. The idea of an enlightened investor empowered to make informed financial choices was central to the discussions. The symposium also explore the exciting possibilities presented by the encouraging trend of increasing participation of women in financial markets.

ED has provisionally attached bank accounts of Popular Front of India and Rehab India Foundation having collective balance of Rs. 68,62,081 under PMLA, 2002.
01 Jun ,2022

ED has conducted searches under PMLA, 2002 at the residential and official premises of Subhra Jyoti Bharali, the then Managing Director of Industrial Co-operative Bank Limited (ICBL), under PMLA, 2002 in connection with misappropriation of bank funds of Rs. 9.5 Crore.
01 Jun ,2022

ED has provisionally attached assets worth Rs.1.91 Crore of Sanjeev Kumar, Puja Shrivastav and others under PMLA, 2002 in a fake degree certificate case of “Techno Global University, Shillong, 01 June 2022

Prevention of Money Laundering Act, 2002 (PMLA) and Fugitive Economic Offenders Act, 2018 (FEOA) provide that the Special Court trying the offence may restore any property/assets involved in money laundering to a third party claimant with legitimate interest, including banks. This was stated by Union Minister of State for Finance Shri Pankaj Chaudhary in a written reply to a question in Rajya Sabha today.

The Minister stated that in the cases pertaining to Vijay Mallya, Nirav Modi and Mehul Choksi who have defrauded Public Sector banks by siphoning off the funds through their companies which resulted in total loss of Rs. 22,585.83 crore to the public sector banks.

The Minister further stated that as on 15.03.2022, 84.61% of the total defrauded funds in these cases have been attached/seized and 66.91% of total loss to the banks has been handed over to Banks/Confiscated to Government of India. It is pertinent to mention here that as on 15.03.2022, the consortium of banks led by SBI has realized Rs. 7,975.27 crore by sale of assets handed over to them by the Directorate of Enforcement, the Minister added.

For your quick reference

Section 13 in The Prevention of Money-Laundering Act, 2002

13. Powers of Director to impose fine.—

(1) The Director may, either of his own motion or on an application made by any authority, officer or person, call for records referred to in sub-section (1) of section 12 and may make such inquiry or cause such inquiry to be made, as he thinks fit.

(2) If the Director, in the course of any inquiry, finds that a banking company, financial institution or an intermediary or any of its officers has failed to comply with the provisions contained in section 12, then, without prejudice to any other action that may be taken under any other provisions of this Act, he may, by an order, levy a fine on such banking company or financial institution or intermediary which shall not be less than ten thousand rupees but may extend to one lakh rupees for each failure.