Heralding the beginning of “Azadi ka Amrit Mahotsav” and to commemorate the milestone of reaching more than 9 lakh beneficiaries under its Tele-Law programme, Department of Justice organized an event here today. Shri Ravi Shankar Prasad, Minister of Law and Justice, Electronics & Information Technology and Communications was the chief guest on this occasion. Today more than 50,000 Tele Law functionaries across the country got the chance to see and digitally connect with the event. 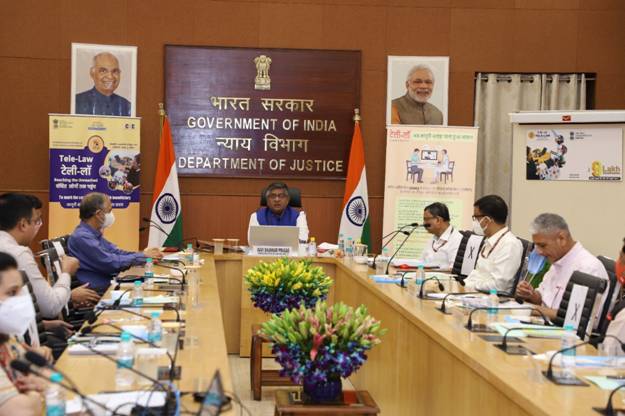 Speaking on the occasion, Law Minister Shri Ravi Shankar Prasad commended the efforts of VLEs, PLVs, State Coordinators and Panel Lawyers who have become a support pillar for connecting, and solving the day- to- day socio –legal concerns /conflicts of common citizens and facilitating the masses in availing benefits introduced for them under various schemes. The Minister appreciated the efforts of Department of Justice for collection and compilation of real time stories of the beneficiaries. Minister also mentioned about the potential of Tele Law to foster inclusive character of justice delivery and strengthening rule of law.

A virtual tour of two of the remotest Common Service Centres (CSCs) in M. Rampur Panchayat of Kalahandi district in Odisha and CSC in Tullamulla Panchayat of Ganderbal district in UT of Kashmir was also made by Minister that revealed the reach of technology in the far flung areas. The tour helped in understanding the challenges that the VLEs/PLVs encounter in ensuring Tele-Law service reaches the masses.

While speaking at the event, Shri Barun Mitra, Secretary, Department of Justice, Ministry of Law & Justice, said that Integrating smart technology through tele and video conferencing, Tele Law has mainstreamed legal aid to the marginalized by connecting them with a dedicated pool of Panel Lawyers either free of cost if so entitled or at nominal fees. A vast cadre of frontline Para Legal Volunteers and Village Level Entrepreneurs belonging to the local CSC neighborhood assist in awareness generation and online registration of beneficiaries needing advice. To ensure seamless penetration in remote geographical hinterlands for better beneficiary coverage, Department of Justice has also developed Tele-Law Mobile App for PLVs.

Highlighting the rapid expansion of Tele-Law initiative, Shri Mitra said, “Tele–Law began its humble journey in 2017 by covering 170 districts in 11 States through 1800 CSCs. In 2019, 115 Aspirational Districts were added taking the number of CSCs to 29,860. Department of Justice is proud that today Tele-Law is operational in 633 districts in 34 States/UTs covering 50,000 CSCs.”

He further said that Tele-Law saw a surge of 369% growth in number of beneficiaries seeking legal advice during last one year. This medium was extensively used by common citizens for asserting their rights and entitlements during the Covid Pandemic. We have touched a new milestone in June, 2021 with more than 9.5 lakh citizens being benefited by Tele-Law.

Tele-Law programme is presently operational in 633 districts (including 115 Aspirational Districts) across 34 States/UTs through a network of 50,000 CSCs.  The programme connects the disadvantaged and needy seeking legal advice from Panel Lawyers through e-interface platform available in Common Service Centres(CSC).

To mark the occasion, the Minister for Law & Justice released a Special Postal cover on Tele-Law- Reaching the Unreached. The front cover depicts photo of Panel lawyer providing advice to the beneficiaries through video/tele conferencing. It also features the images of beneficiaries, who are seen talking to the Panel Lawyers, thus portraying their efforts in overcoming barriers of anxieties, fears and inherent hesitancy in using technological platforms. It also highlights the five steps that are used in connecting a beneficiary with the Panel Lawyer to seek legal advice at the Common Service Centres, truly uncovering why Tele-Law can be said a unique initiative in “Kanooni Salah ki Aur Anootha Kadam”. 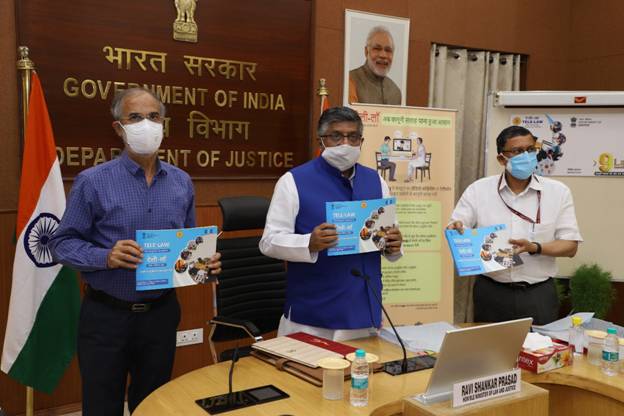 Tele-Law is rightly moving in the direction of legal empowerment and in connecting the last mile through technology which is well documented in the booklet “Voices of the Beneficiaries”. The e–edition of the first and second edition of the Voices of the beneficiaries was released in September, 2020 and March 2021. The third edition along with the previous two editions was released by Hon’ble Minister. In his foreword to “Voices of the Beneficiaries” 3rd Edition, the Hon’ble Minister of Law and Justice Shri Ravi Shankar Prasad has underlined that the mainstreaming of legal aid underpins the precept of Sabka Saath, Sabka Vikaas and Sabka Nyaya, as envisioned by the Prime Minister.

Inspired by the real time stories and true events, a short film on Tele-Law: Reaching the Unreached, was also released. In addition, 6 specific capsule of approximately one minute on the beneficiaries from the States of Telangana, Tamil Nadu, Assam, Odisha, Jharkhand and UT of Kashmir have been developed highlighting the penetration and outreach of the programme.

New Signboard for CSCs providing Tele-Law service was released that has been rechristened as “कानूनी सलाह सहायक केंद्र“. The move is intended to bring prominence on the delivery of Legal advice and consultation service through Tele-Law as one of the key service amongst the bouquet of other services provided by these CSC centers.

Even though Tele-law programme is technology driven, its success is dependent on the working of field functionaries comprising of Village Level Entrepreneurs(VLEs), Para Legal Volunteers (PLVs), State Coordinators and Panel Lawyers. The event also marked felicitation of twenty best performing field functionaries under these categories in five zones of the country. The category wise details are as under:

Three of these winners and coincidently all of them female were able to attend the event physically that shows Tele Law programme is truly a movement towards women legal empowerment. Minister interacted with the awardees and encouraged them to mobilize awareness especially amongst the rural women and girls so that they could feel empowered.  He underlined the importance of Tele Law as a tool for ensuring gender justice.  The awardees are: –

1. Ms. Shraddhanjali Jha, (PLV), from Sultanpur, Uttar Pradesh associated since 2017 and has registered & enabled 500+ cases of the beneficiaries.

2. Dr. Mukesh Lata (State Coordinator) of Punjab. She is associated since 2019 and has been closely working with DLSA officials, police authorities and the local bodies of districts.

3. Ms. Shwetanjali Mishra (Panel Lawyer) Maharashtra). She is associated since 2019 and has enabled 30000+ advices to the beneficiaries & got 34 success stories featured in the Voices of Beneficiaries

The event was attended by senior officials of Department of Justice, CSC e-Gov, India Post and National Legal Service Authority.