AS PER WORLD BANK, ADB AND IMF PROJECTIONS, INDIA TO REMAIN THE FASTEST GROWING MAJOR ECONOMY IN THE WORLD DURING 2021-24

FISCAL DEFICIT FOR APRIL-NOVEMBER 2021 CONTAINED AT 46.2% OF BUDGET ESTIMATES

CAPITAL MARKET BOOMS DESPITE PANDEMIC; OVER RS 89 THOUSAND CRORE RAISED VIA 75 IPO ISSUES IN APRIL-NOVEMBER 2021, MUCH HIGHER THAN IN ANY YEAR IN THE LAST DECADE

India to witness GDP growth of 8.0-8.5 per cent in 2022-23, supported by widespread vaccine coverage, gains from supply-side reforms and easing of regulations, robust export growth, and availability of fiscal space to ramp up capital spending.

The Union Minister for Finance & Corporate Affairs Smt Nirmala Sitharaman tabled the Economic Survey 2021-22 in Parliament today, which states that the year ahead is well poised for a pick-up in private sector investment with the financial system in a good position to provide support to the revival of economy. The growth projection for 2022-23 is based on the assumption that there will be no further debilitating pandemic related economic disruption, monsoon will be normal, withdrawal of global liquidity by major central banks will be broadly orderly, oil prices will be in the range of  US$70-$75/bbl, and global supply chain disruptions will steadily ease over the course of the year. 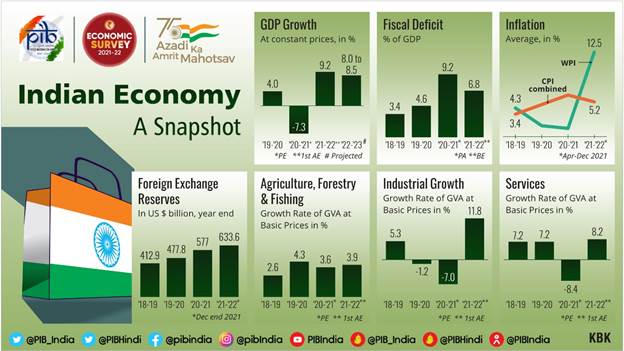 The Survey says, the above projection is comparable with the World Bank’s and Asian Development Bank’s latest forecasts of real GDP growth of 8.7 per cent and 7.5 per cent respectively for 2022-23. As per the IMF’s latest World Economic Outlook (WEO) growth projections released on 25th January, 2022, India’s real GDP is projected to grow at 9 per cent in both 2021-22 and 2022-23 and at 7.1 per cent in 2023-24. This projects India as the fastest growing major economy in the world in all these three years. 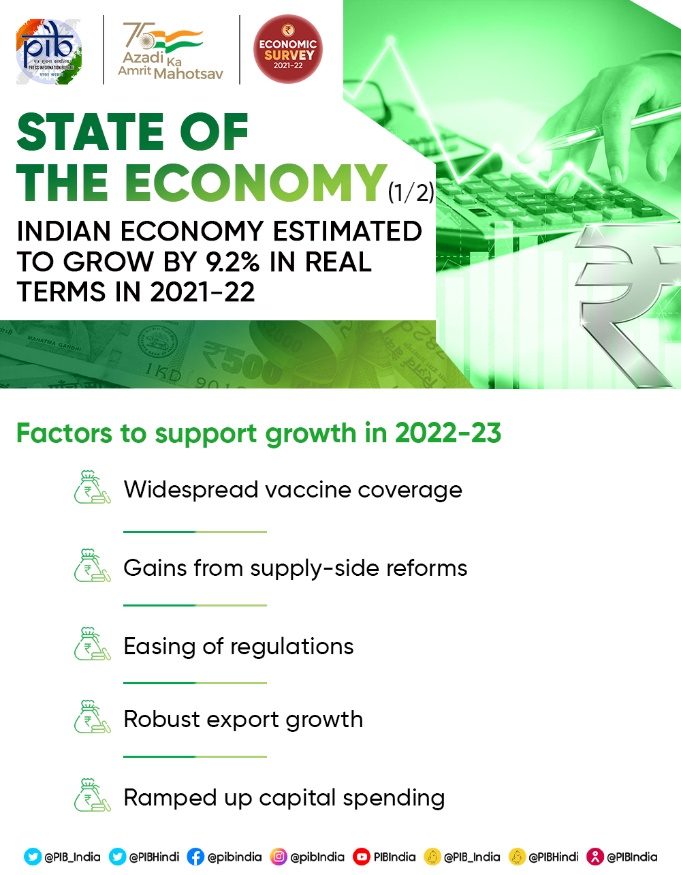 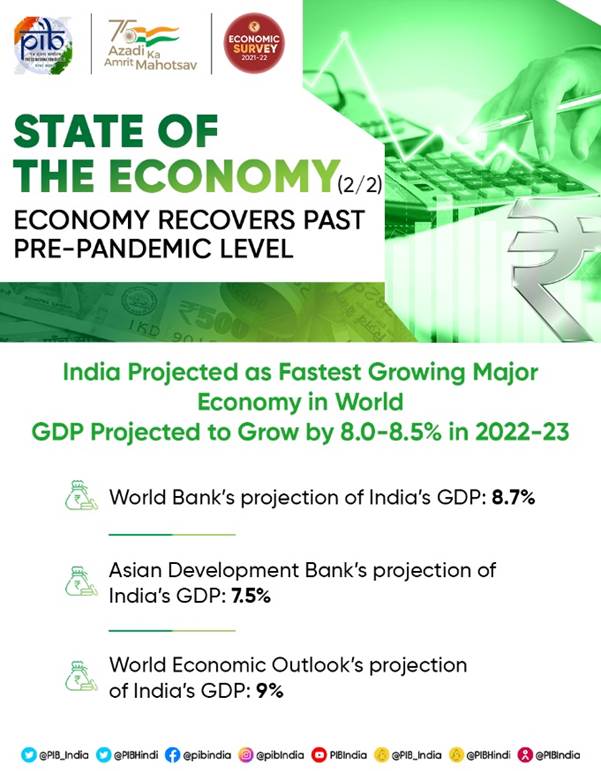 Referring to First Advance Estimates, the Survey states that the Indian economy is estimated to grow by 9.2 per cent in real terms in 2021-22, after a contraction of 7.3 per cent in 2020-21. This implies that overall economic activity has recovered past the pre-pandemic levels. Almost all indicators show that the economic impact of the “second wave” in Q1 was much smaller than that experienced during the full lockdown phase in 2020-21, even though the health impact was more severe. 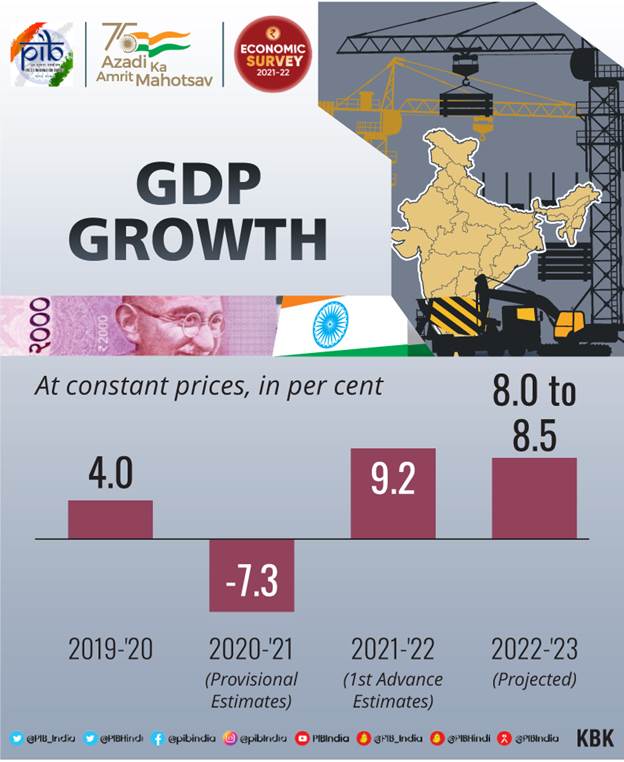 Dwelling on the sectoral aspects, the Survey states that Agriculture and allied sectors have been the least impacted by the pandemic and the sector is expected to grow by 3.9 per cent in 2021-22 after growing by 3.6 per cent in the previous year. The area sown under Kharif and Rabi crops, and the production of wheat and rice has been steadily increasing over the years. In the current year, food grains production for the Kharif season is estimated to post a record level of 150.5 million tonnes. Moreover, procurement of food grains under the central pool accordingly maintained its rising trend in 2021-22 along with minimum support prices, which augur well for national food security and farmers’ incomes. Importantly, the strong performance of the sector was supported by Government policies that ensured timely supplies of seed and fertilizers despite pandemic related disruptions. It was helped by good monsoon rains as reflected in reservoir levels being higher than the 10-year average. 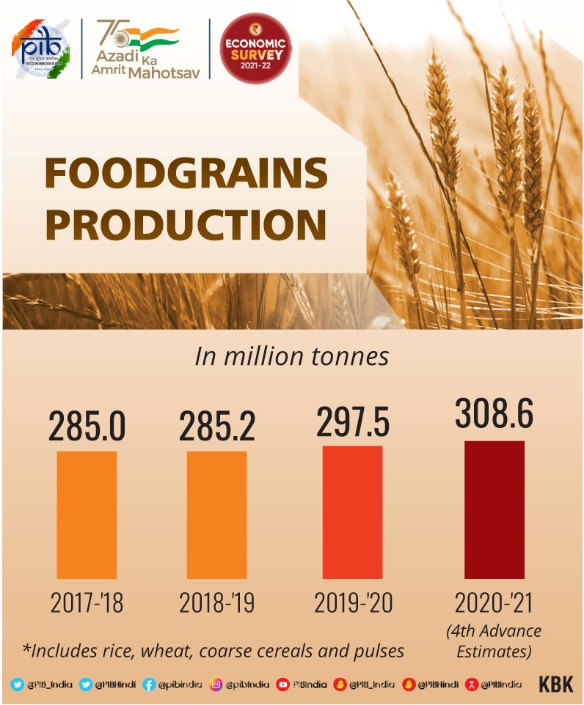 According to Survey, the industrial sector went through a sharp rebound  from a contraction of 7 per cent in 2020-21 to an expansion of  11.8 per cent in this financial year. The manufacturing, construction and mining sub-sectors went through the same swing although the utilities segment experienced a more muted cycle as basic services such as electricity and water supply were maintained even at the height of the national lockdown. The share of industry in GVA is now estimated at 28.2 per cent.

The Survey states that the services sector has been the hardest hit by the pandemic, especially segments that involve human contact.  This sector is estimated to grow by 8.2 per cent this financial year following last year’s 8.4 per cent contraction. It should be noted that there is a wide dispersion of performance by different sub-sectors. Both the finance /Real Estate and the Public Administration segments are now well above pre-COVID levels. However, segments like Travel, Trade and hotels are yet to fully recover. There has been a boom in software and IT-enabled services exports even as earnings from tourism have declined sharply.

According to the Survey, Investment, as measured by Gross Fixed Capital Formation (GFCF) is expected to see strong growth of 15 per cent in 2021-22 and achieve full recovery of pre-pandemic level. Government’s policy thrust on quickening virtuous cycle of growth via capex and infrastructure spending has increased capital formation in the economy lifting the investment of GDP ratio to about 29.6 per cent in 2021-22, the highest in seven years. While private investment recovery is still at a nascent stage, there are many signals which indicate that India is poised for stronger investment. A sturdy and cleaned-up banking sector stands ready to support private investment adequately.

On the Exports and Imports front, the Survey states that India’s exports of both goods and services have been exceptionally strong so far in 2021-22. Merchandise exports have been above US$30 billion for eight consecutive months in 2021-22, despite many pandemic related global supply constraints. Net services exports have also risen sharply, driven by professional and management consulting services, audio visual and related services, freight transport services, telecommunications, computer and information services. From a demand perspective, India’s total exports are expected to grow by 16.5 per cent in 2021-22 surpassing pre-pandemic levels. Imports also recovered strongly with revival of domestic demand and continuous rise in price of imported crude and metals. Imports are expected to grow by 29.4 per cent in 2021-22 surpassing corresponding pre-pandemic levels. Resultantly, India’s net exports have turned negative in the first half of 2021-22, compared to a surplus in the corresponding period of 2020-21. But current account deficit is expected to remain within manageable limits.

Further, the Survey points out that despite all the disruptions caused by the global pandemic, India’s balance of payments remained in surplus throughout the last two years. This allowed the Reserve Bank of India to keep accumulating foreign exchange reserves, which stand at US$634 billion on 31st December 2021. This is equivalent to 13.2 months of imports and higher than the country’s external debt. 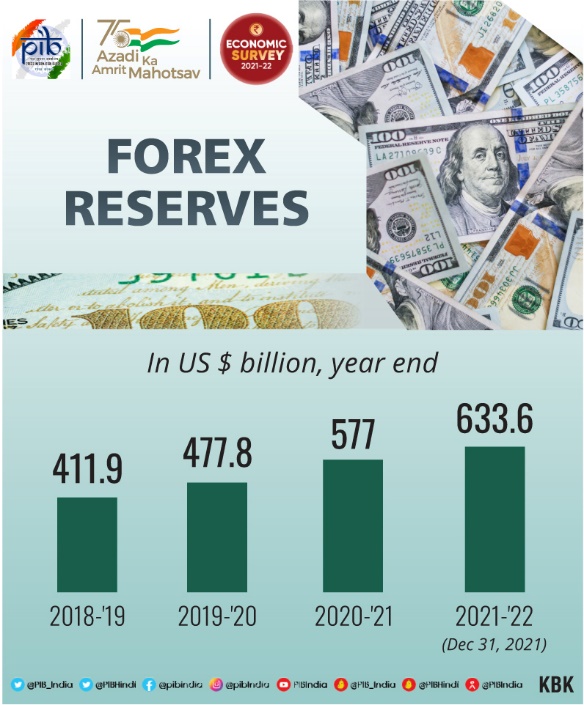 The Survey notes that inflation has reappeared as a global issue in both advanced and emerging economies. The surge in energy prices, non-food commodities, input prices, disruption of global supply chains, and rising freight costs stoked global inflation during the year. In India, Consumer Price Index (CPI) inflation moderated to 5.2 per cent in 2021-22 (April-December) from 6.6 per cent in the corresponding period of 2020-21. It was 5.6 per cent (YoY) in December 2021, which is within the targeted tolerance band. The decline in retail inflation in 2021-22 was led by easing of food inflation. Wholesale Price Inflation (WPI), however, has been running in double-digits.

The Survey says that fiscal support given to the economy as well as the health response caused the fiscal deficit and government debt to rise in 2020-21. However, there has been a strong rebound in government revenues in 2021-22 so far. The revenue receipts of the central government during April-November 2021 have gone up by 67.2 per cent (YOY), as against an expected growth of 9.6 per cent in the 2021-22 Budget Estimates over provisional actuals. The tax collections have been buoyant for both direct and indirect taxes and the gross monthly GST collections have crossed Rs 1 lakh crore consistently since July 2021. 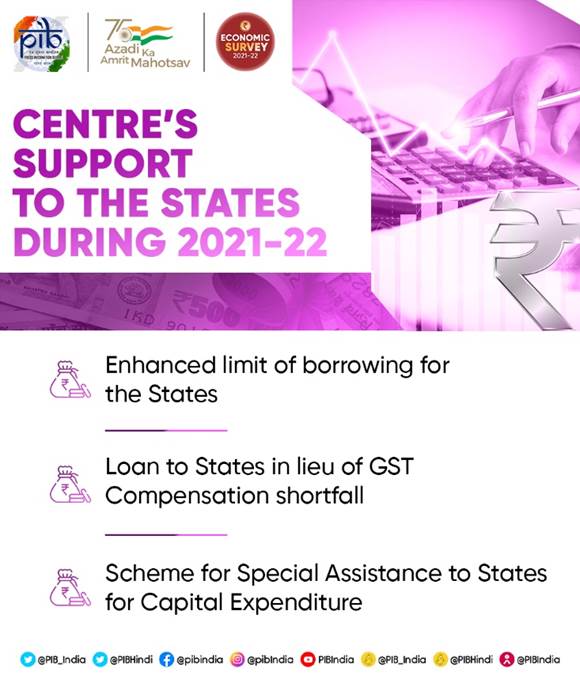 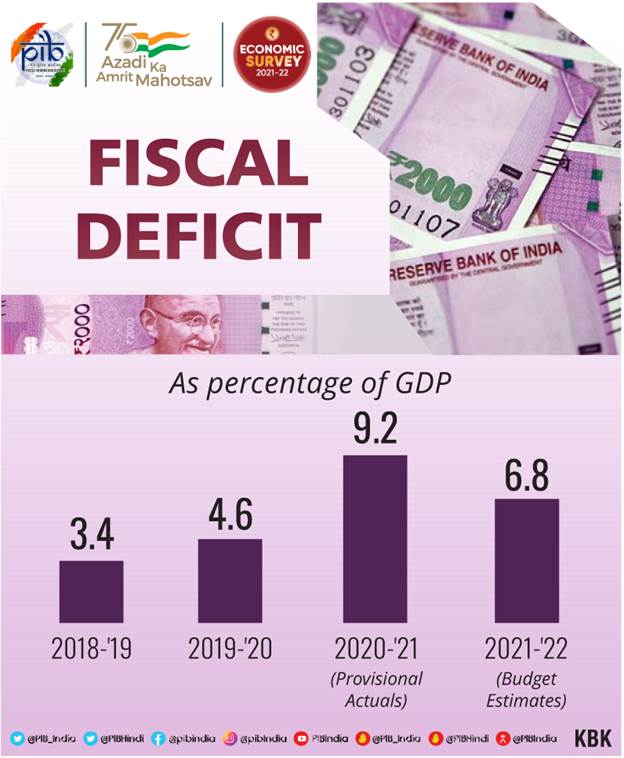 The Survey points out that the financial sector is always a possible area of stress during turbulent times. However, India’s capital markets have done exceptionally well and have allowed record mobilization of risk capital of Indian companies. The Sensex and Nifty scaled up to touch its peak at 61,766 and 18,477 on October 18, 2021. Rs 89,066 crore was raised via 75 IPO issues in April- November 2021, much higher than in any year in the last decade. Moreover, the banking system is well capitalized and NPAs seems to have structurally declined. The Gross Non-Performing Advances (GNPA) ratio (i.e. GNPAs as a percentage of Gross Advances) and Net Non-Performing Advances (NNPA) ratio of Scheduled Commercial banks (SCBs) continued to decline since 2018-19. GNPA ratio of SCBs decreased from 7.5 per cent at end-September 2020 to 6.9 per cent at end-September 2021.

The Survey expresses that another distinguishing feature of India’s economic response has been an emphasis on supply-side reforms rather than a total reliance on demand management. These supply-side reforms include deregulation of numerous sectors, simplification of processes, removal of legacy issues like ‘retrospective tax’, privatization, production-linked incentives and so on. Even the sharp increase in capital spending by the Government can be seen as both demand and supply response as it creates infrastructure capacity for future growth.

There are two common themes in India’s supply-side strategy: (i) Reforms that improve flexibility and innovation in order to deal with the long-term unpredictability of the post-Covid world. This includes factor market reforms; deregulation of sectors like space, drones, geospatial mapping, trade finance factoring; process reforms like those in government procurement and in telecommunications sector; removal of legacy issues like retrospective tax; privatization and monetization, creation of physical infrastructure, and so on. (ii) Reforms aimed at improving the resilience o the Indian economy. These range from climate/environment related policies; social infrastructure such as public provision of tap water, toilets, basic housing, insurance for the poor, and so on; support for key industries under Atmanirbhar Bharat; a strong emphasis on reciprocity in foreign trade agreements, and so on.

An important theme that has been discussed through the course of the Economic Survey is that of ‘process reforms’. It is important to distinguish between deregulation and process reforms. The former relates to reducing or removing the role of government from a particular activity. In contrast, the latter broadly relates to simplification and smoothening of the process for activities where the government’s presence as a facilitator or regulator is necessary.

The Survey points out that the last two years have been difficult for the world economy on account of the COVID-19 pandemic. Repeated waves of infection, supply-chain disruptions and more recently, global inflation have created particularly challenging times for policy-making. Faced with these challenges, the Government of India opted for a ‘ Barbell Strategy” that combined a bouquet of safety-nets to cushion the impact on vulnerable sections of society and the business sector. It next pushed through a significant increase in capital expenditure on infrastructure to build back medium-term demand as well as aggressively implemented supply-side measures to prepare the economy for the sustained long-term expansion. This flexible and multi-layered approach is partly based on an “Agile” framework that used feedback-loops, and the monitoring of real-time data.

The Survey underlines that Monetary policy since the outbreak of the pandemic was calibrated to provide a cushion and support growth, but carefully controlled in order to avoid the medium term dislocations of excess liquidity. An important aspect of the safety-net was the use of Government guarantees to provide access to financial support to the economy in general and MSMEs in particular. In the last two years, government leveraged an array of eighty High Frequency Indicators (HFIs) representing industry, services, global trends, macro-stability indicators and several other activities, from both public and private sources to gauge the underlying state of the economy on a real-time basis. These HFIs helped policy makers tailor their response to an evolving situation rather than rely on pre-defined responses of a Waterfall framework, which has been the conventional method for framing policy in India and most of the world.

Read this release in

SUMMARY OF THE ECONOMIC SURVEY 2021-22AS PER WORLD BANK, ADB AND IMF PROJECTIONS, INDIA TO REMAIN THE FASTEST GROWING MAJOR ECONOMY IN THE WORLD DURING 2021-24I